On the Annotated Animated All-Stars 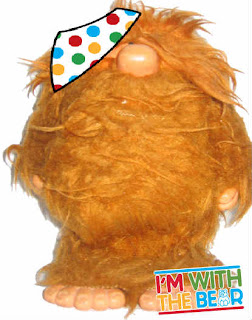 Children in Need is a stellar charity from Great Britain dedicated to helping disadvantaged kids in the UK. It's been going for over 20 years now, spearheaded by British chat showlegend Terry Wogan it's raised hundreds of millions of pounds, over 20 million this year alone.
Their annual appeal is the big push - the BBC hands seven hours of programming time over for a telethon, and most other shows in britain have special Children in Need episodes, so it's practically an all-day event. Performers will sing and dance, many shows will do special mini-episodes (Doctor Who did one as a teaser to the upcoming "The End Of Time" and even David Suchet put back on the waxed moustache to play Poirot (I have GOT to see that one). All told, it's a star-studded piece of work.

British stand-up star Peter Kay (best known to Americans as The Absorbaloff in the Doctor Who episode "Love and Monsters") has done a great deal to raise money for equally notable British charity Comic Relief (sporting a more globally oriented take than CiN) by producing music videos featuring dozens of comedy and film stars. This year, he set his eyes towards Helping Children in Need. Everyone expected another entertaining celebrity jam video. That's what he delivered, but he surprised everybody with WHO he jammed with.

Having made friends with a lot of animators by doing voices for kids' show Roary the Racing Car, he got a jam together featuring over 100 animated characters from over 60 years of British and American animation. It's a breathtaking piece of work that took over 8 months to produce. The majority of the shows are now controlled by HiT Entertainment, which certainly must have streamlined the negotions, but when you consider all the animators, voice talent etc who donated their time, this is no less impressive than any fundraising jam.
I spent most of the weekend researching and freeze-framing, and I present for you entertainment a second by second rundown of the characters who appear in the video. I've pretty much stuck with the first appearance of each character, with weblinks for the shows where appropriate.
There's only a couple I've missed, and I'd appreciate help in tying up the last few missing folks.
-EDIT- Well that didn't take long, got most of the holes filled in already by the commenters - ta, mateys!

With that said, the management humbly presents:
A Guide to the animated All-Stars
00;01 Big Chris (voiced by Kay) and Rusty the Caravan from
Roary the Racing Car(RRC). Chris is asking after Chippy Minton from "Camberwick Green".

00:17 Thomas the Tank Engine (TTE) heads from the isle of Sodor to the studio.

00:20 Postman Pat (PP) heads from Greendale to the studio in the SDS mini-van

00:22 Fifi Forget-Me-Not from Fifi and the Flowertots (FF), riding in Mo the Lawnmower, head in

00:27 The eponymous Teletubbies meet Upsy-Daisy from In the Night Garden(ING).

00:37 The Teletubbies jam with Willy and Jenny Woodentop from Watch with Mother (WWM)

00:42 Andy Pandy (WWM) looks on as Bob the Builder and Postman Pat do a take

00:45 It's gonna get crowded from here, on - welcome to Bagpuss, Pingu, Sir Topham Hatt AKA The Fat Controller(TTE) Ted Glenn and Mrs Goggins(PP)

00:57 Frank and Buster, the Koala Brothers

01:01 Marsha (RRC) and Wendy (BB) do a duet With Big Chris moonwalking by, and IgglePiggle wanders into shot.

01:10 The gang from In the Night Garden are upstaged by Pingu.

01:11 Paolo and Mavis from Fluffy Gardens appear via stellite

01:12 The Teletubbies do a backup chorus (Singing, of course "Eh-ohhhhh!")

01:13 Zippy and George from Rainbow fiddle with the keyboards

01:14 Andy Pandy, Teddy and Looby Loo (WWM) are entertained by Big Chris as Sir Topham Hatt looks on and Pingu covers up in safety

01:16 Lady Penelope Creighton-Ward and FAB1 from Thunderbirds (TB) are swarmed by paparazzi but are quickly upstaged by...

01:21 Paddington Bear, axe in hand, arrives for the show

01:24 Tubb and Terence from the Rubbadubbers (RBD) watch Bill and Ben play with the drums as...

01:25 Norville "Shaggy" Rogers and Scooby Doo appear via satellite on a monitor Big Chris wheels in.

01:33 The Koala Brothers sing a few lines, as Andy Pandy tunes in Muffin the Mule (WWM) on a monitor

01:47 Peppa Pig appears via satellite
(Running gag explained The monitors during the video are all staticy and need adjusting. Here, Big Chris is reading the copy of the flyer about the recent digital switchover Britain did, as America recently did, converting from analog to digital TV broadcasts.)

01:50 Stretchy, Tiny and Sporty from
Little Robots (LR) appear with Sweep, Sooty and Soo from The Sooty Show (TSS)

01:55 Pudsey Bear, mascot of Children in Need gets a guitar solo

02:20 Roary and Thomas again, as Pilchard, Jollop and Jess(PP) race by

02:57 Ajay joins the gents, along with Virgil Tracy, Parker and Brains (TB) in a chorus of Tubthumping As they all jump, the members of International Rescue all follow the song, "get knocked down and get up again"

03:25 Roobarb and Custard appear via satellite with Tiny's help

03:35 Pingu makes his way down the beach for the finale

03:44 All appear again, with new arrivals Splashy (RBD) and a couple folks from Camberwick Green.

03:54 The Night Garden gang fly overhead in the Pinky Ponk

04:33 The first shall be last - Chippy Minton arrives just in time for the end of the song.
The video is available for purchase (profits to CiN) via several online websites, tho alas the Itunes link (which features a six-minute version of the clip) is not available in the US. Visit the Children in Need website for more information on donating, as well as more info on the work they've done to help the children of the UK.
Personally, I think it's a shame that nothing has been done in similar fashion and scope here in the US. We had Bob "Thank God I knew Andy Kaufman" Zmuda's American version of Comic Relief which fizzled years ago, but really the only remnant we have of this type of thing is the legendary Jerry Lewis MDA telethon. And I fear that when Jerry passes on, we won't even have that.
EDIT - Two more great reference works have popped up - The Sun has a guide to the Sgt. Pepper-like album cover, and Wikipedia has a list of all the characters who appear in the medley.
at 11:07 AM