On a series that deserves a lot more respect and recognition

Quick, what's the first series to feature Julie Newmar as a regular?

What TV show did Julie Newmar appear on more than any other?

You're causing quite a breeze, there, but you ain't hitting anything. 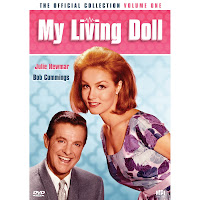 My Living Doll was the delightful Julie Newmar's first TV series, starring with Bob Cummings, returning to television after TWO eponymous TV shows.  It was the second TV series by Jack Chertok in the genre he pioneered, what would eventually be known as the "Magic Sitcom". After a number of very successful Western shows including the legendary Lone Ranger, Jack tried his luck at comedy and knocked it out of the park with My Favorite Martian.  The premise of a hapless innocent suddenly caring for a somewhat unique individual (in this case, a Martian) proved quite the hit, and when he announced plans to swap the gender of the co-star with his second series, CBS bought the series blind, without so much as a pilot.

Julie Newmar plays Rhoda, AKA experiment AF 709, a robot (technically an android, but why quibble with names) designed to man one of America's space capsules. She gets out of her lab, and her builder solicits his colleague Dr. Bob McDonald (Cummings) to find her.  Bob is understandably sceptical of her makeup, but after a brief display of its specs and capabilities (rowr rowr), he realizes he's not on Candid Camera.  As soon as he accepts the facts at hand, things get crazier - AF 709's designer is called overseas, and asks Bob to care for the robot until he returns.

Bob has to keep "Rhoda's" (hastily named after Bob's aunt) origins a secret from all and sundry, including his sister, his girlfriend (Doris Dowling) and his other colleague, physicist and lothario Peter Robinson (Jack Mullaney).  Aside from the simple problems of keeping an emotionless and literal-minded female robot from getting into embarassing social situations, they came up with rather ingenious malfunction plots as well.  In on episode, we learn that Rhoda is sensitive to the work of Lewis Carroll - he was a mathematician, and his verse is written (so the show explains) according to mathematic progressions that act like a virus to Rhoda's systems.

The show only lasted one season of 26 episodes, and Bob Cummings only lasted 21.  He left the show early, and Jack Mullaney's character was let in on the secret and given custody of Rhoda.

Sadly, like so many series from the early days of television, many episodes are lost.  The box set only includes 11 episodes, the only ones currently known to exist, one of which is of lesser enough quality that it's billed as a "bonus episode" in the special features. Other specials include a new documentary about the show, featuring interviews with Newmar and Doris Dowling, as well as producer Howard Leeds.  They also tracked down a radio interview with Julie and Lucille Ball (the show was filmed at Desilu Studios, hence the connection) and some of the original commercial breaks.

While the show itself may have (undeservedly) slipped through the cracks of TV history, many of its concepts and tropes didn't. Interestingly enough, this show is the first one to use the classic bit of robot dialogue "That does not compute". This is the show that set up the standards that would be used on Bewitched and I Dream of Jeannie in the coming years.  It's rather interesting that Martian, which proceeded it, would outstrip Doll by two years, three seasons to its one.  Perhaps the somewhat risque setup was a bit too wild for the time.

Julie Newmar is always a stunner (her brief appearance as Stupefyin' Jones in Lil' Abner is worth the price of admission), and her monotone delivery isn't wooden, it's perfect deadpan comedy.  Bob Cummings was as charming as ever, but even the producers admit in the documentary he was a bit old for the role.  One wonders if they'd given Rhoda to Jack Mullaney in the first place if the show could have gone a bit longer.  Jack had some solid comedy chops, and had a long career in character roles.  After Doll, he appeared in another one-season wonder, Sherwood Schwartz' It's About Time, as well as a return to the sexy robot genre, Doctor Goldfoot and the Bikini Machine, one of the Beach party films, starring Vincent Price in the title role.