On how we strive for Nick and Nora, but settle for Rob and Laura 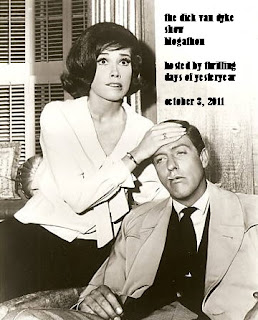 This blog  post is a part of the Dick van Dyke Show blogathon, hosted by the folks at Thrilling Days of Yesteryear. Click the link to see a list of other folks touching on the same topic today.

So this is why, until I was about 20, I didn't know New Rochelle was a real place.

I was driving up to Yonkers with The (eventually) Wife, saw a sign for the exit to New Rochelle, and honestly said "You mean it's actually a place?"  She looked at me like I had lobsters on my face.  "But that's where Rob and Laura Petrie lived!"  She assured me it was indeed a place, and the doors of my world opened just a bit wider.

The Dick Van Dyke show was one of my favorite sitcoms as I was growing up. I first saw Mr. Van Dyke (As most kids my age did) in Mary Poppins, and while the show was  far sight from the movie, it became regular viewing for me.Rob and Laura had the kind of relationship The Wife and I have - we have fun, we overreact to things, and while neither of write for a comedy show, we're as witty as the cast of the show.  As the title says, as much as we'd like to be Nick and Nora Charles (Heck, I'd settle for Ralph and Sue Dibny, without all the unpleasantness at the end, of course), we more often than not end up as Rob and Laura.

I've said for many years that Dick Van Dyke is an under-appreciated actor.  I've written about two of his films at The Wife's blog:  Cold Turkey, a vicious little bit of satire about a small town trying to quit smoking en masse to win a twenty five million dollar prize, and Fitzwilly, a caper flick with Dick as a con man butler who rooks the upper class of New York City, all to keep his bankrupt dowager boss from going to the poorhouse.  Neither feature much of his trademark physical comedy, but a lot more of his acting chops.

The Dick Van Dyke Show was much more the work of Carl Reiner, who created the show and appeared as Alan Brady, eponymous star of the show for which Rob wrote.  The show was clearly based on Reiner's work as a writer for the legendary Your Show of Shows, starring Sid Caesar.  The show featured a true Murderer's Row of writers - Neil Simon, Mel Brooks, Woody Allen, and many others cut their teeth on that show.  Carl's not the only one to dig into the show for inspiration - Neil Simon wrote Laughter on the 23rd Floor and Mel Brooks produced My Favorite Year, a fictional tale based in that legendary writer's room.  Few remember the short lived sitcom starring ex-Roseanne beau Tom Arnold called The Jackie Thomas Show, but after one episode I realized it was essentially an update of the Dick Van Dyke Show, but with the Alan Brady character taking more of a center role. Indeed, the same could be said of 30 Rock as well.

Picking a favorite episode of this series borders on the impossible.  But I knew there was going to be a near riot for the right the do "It only Looks Like a Walnut" (Brandie got it over at True Classics) so I went with another flying saucer epic, "Uhnny Uftz"


Rob, Buddy and Sally are pulling an all-nighter at the office, and while the others are out getting coffee, Rob hears an unearthly sound and sees a flying saucer outside the window of his office.  Buddy and Sally return too late to see it, and assume Rob was asleep and dreamed it.  Rob is adamant, even as he explains that the saucer had lightning bolts on it like the comic strip star Brick Bradford, and the eerie ship spoke, saying what sounded like "Sonny Tufts".

Laura is no more receptive to Rob's tale, and chides him gently.  He gets no further when he reports the sighting to the government, and when his psychologist friend assures him that he really did likely imagine it, he lets it pass.  But after another all-nighter the next evening, Rob hears and sees it again.  This time, however, Buddy returns in time to hear the Gas Music From Jupiter, which they determine is now coming from somewhere upstairs in the building.

Exploring the floor above, they are confronted by a man who seems to know about the saucer, and is most distressed that it had any witnesses.  After a seemingly threatening request to enter his office, he reveals that there really is a saucer, but it's a toy, and the secrecy is to make sure the invention isn't stolen before Christmas.  Rob and Buddy agree to keep mum i exchange for one favor - a five minute chance to spin the thing around the room.

Dick Van Dyke gets the chance to do a bit of schtick, lots of fright reactions and bit of work up on the office windowsill.  He also excels at talking to himself, and has a fun scene as he listens to perfectly normal sounds that seem terrifying at three in the morning when you're only person in a huge office building.

Two notable guest stars in the episode - Madge "Aunt Harriet" Blake as a batty lady at the Metro North station who claims to have seen the saucers as well, and that little old toymaker was John Mylong, who played the elder scientist in the infamous masterpiece Robot Monster.

This is an episode I saw the first half of as a kid at my grandmother's house, and had to head for home before the payoff.  I didn't see the end of the episode for almost ten years, so needless to say I was primed to learn the secret of the mysterious saucer.