On a look at the Red Circle part 2: The Comet

Continuing my series of histories on the MLJ / Red Circle heroes in preparation for the first issue of New Crusaders on May 16th, here's...

The Comet - The Most Astonishing Man on the Face of the Earth! 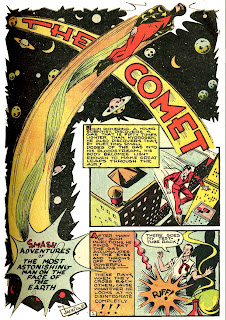 The Comet appeared in PEP #1 along with The Shield.  He was created by Jack Cole, a creative dynamo of the Golden Age, who had just helped tweak Lev Gleason's Daredevil, and after the first few issues, went on to create Plastic Man.

His origin was presented in his first adventure - Chemist John Dickering discovers a gas "fifty times lighter than hydrogen", and discovers he can make himself "light enough to make great leaps through the air" when he injects the gas into his bloodstream.  (That's right kiddies, if Joe Higgins' twelve hours of X-ray exposure wasn't dangerous enough, this guy is injecting gas bubbles into his veins.  Comic book science is AWESOME.) After many self-experiments, he discovers a chilling side effect - his eyes now emit rays that when they cross (in other words, when he focuses his gaze), they disintegrate whatever he looks at.  He quickly discovers that the only thing immune to the rays is glass, so he quickly fashions a glass visor to stop the deadly rays.

(Sound familiar?  It's positively the same power as Cyclops some twenty-five years hence, save for Scott Summers' eye beams being an "impact beam" and his visor using rose quartz.  Once again, the MLJ heroes innovate where others imitate!)

Like another "super" hero, the ability to leap turns into full-blown flight almost immediately, and as we join The Comet for his first printed exploit, he's already got his costume and a pretty good handle on being a hero.  As with The Shield and most of the pre comics code heroes, he's a pretty violent guy - in his first adventure, he's up against a ring of gangsters (get this) distributing Typhoid germs to people as a way of killing their loved ones to collect their life insurance.  In said adventure he "disintegrates" (read: kills) three people, a house, and drops a fourth baddie from a great height, and not into a pile of pillows, if you know what I mean (and I think you do).

His career goes south rather quickly - in PEP #3 he is captured by a criminal with the utterly modest name of Satan and hypnotized into committing crimes for the mastermind.  A quarrel with the hypnotist who did the deed cause The Comet to be ordered to kill Satan, only to neglect to put his visor back down (being hypnotized makes you forget little details like that) and disintegrate the hypnotist in a puff of irony.  He awakens with no knowledge of his actions, and with both guilty parties reduced to their component molecules, no evidence of his innocence.  He spends the next several issues as a fugitive, only able to redeem his name with the help of ace reporter Thelma Gordon, who covers his exploits and convinces the police that he's on the side of the angels.  John and Thelma establish a reomantic relationship as well, and by the time of his last adventure, they're close enough for Thelma to want to get married.

After Cole left the book, The Comet got somewhat spotty treatment. He dropped from second to third position in the book, now supplanted by Danny in Wonderland, a fantasy tale in the Little Nemo mold. He got passed to a few different creative teams - the plot about being an outlaw seemed to come and go, and in one story, he's called "John Dickinson" in error.  One story had him sporting glasses that made him a ringer for one Mr. Kent, (mild mannered reporter for a great metropolitan newspaper), and by the time issue 16 was released, the next issue teaser suggested something quite serious was up for The Comet.

And indeed, in PEP #17, a new hero was introduced, The Hangman, with a groundbreaking origin.  The Comet appears in the beginning of the story capturing a top mobster, and we soon meet John Dickering's brother, Bob, just back from college.  John is too immersed in his work in both chemistry and crimefighting, and asks Bob to take Thelma out on the town.  He does so, and continues to do so for some weeks.

Meanwhile, cronies of the mobster The Comet captured are attempting to get to John Dickering, who will be testifying at the mobster's trial.  They capture Bob, who they mistake for his brother. The comet comes after them, and as Bob tries to escape, the gangsters shoot at him.  The Comet dives in front of the bullets, saving his brother, but at the cost of his own life.  Bob vows revenge, promising to take up John's role of hero.  He swears that he will bring the gangsters to the hangman, that he will "be their Hangman".  He fashions a costume, and with no powers but above-average strength and blind seething rage, becomes the merciless vigilante, The Hangman.

Bob Dickering took Comet's place in the pantheon of heroes, as well as in Thelma Gordon's heart, Hangman got the second spot in PEP back, and The Comet was never heard from again.

In the second era of the MLJ heroes, a new hero know as The Comet appeared in Adventures of The Fly #30, a former ruler of the planet Altrox who comes to earth to woo and wed The Fly's female compatriot, Fly-Girl.  Some months later, in Mighty Crusaders #2, a bit of retconning revealed that this was, in fact, John Dickering, the original Comet.  His death was seemingly written off the board - now after many years of crimefighting, he was enveloped in a mysterious fireball of energy which whisked him off the the planet Altrox, a planet in dire need of a hero.  He aids their queen Naija against a race of "living metal" beasts known as Mecks.  He defeats them easily, and soon the two are wed.  but the last surviving Meck attacks the queen. Tragically, something in the Altroxian atmosphere has cancelled out his powers, and he cannot stop the beast in time.

He remains as king of Altrox for many years, the alien world preserving his youth.  He dons a costume with technology to replace his original powers, and protects the world, but his advisors often catch him watching transmissions from Earth. Eventually he admits that he must return to his homeworld, feeling he must protect them as well.

In the adventures of the eighties, The Comet's Altroxian technology fails him at a vital moment, much in the same way his own powers did on Altrox.  Shortly afterwards, his original powers return, and he dons his old costume.  We need to wait for his abortive (originally six issues, only two were ever released) mini-series to learn more.  His timeline was massaged again, folding back in his death, and birth of The Hangman, again. With the comics Code frowning on showing injections or the taking of any type of drug via needle, John's experiments are done via inhaling his gas mixture. Thelma is now his fiancée from the start, and his transformation to The comet cause his lab to be destroyed, and he presumed dead.  He creates his protective visor in secret, and inspired by heroes like the Shield, fashions his costume and returns to Thelma, who is needless to say, surprised to see him.  They present a slightly amended version of the Typhoid adventure, and brief recaps of the adventures against Satan and the hypnotist, now working on his own.

The initial teleport to Altrox now occurred a bit earlier in his career, and after fighting the Mecks, he was returned to Earth.  His last adventure and passing occurred as seen previously, except that now, after he died, the mysterious fireball returned, looking to Bob and Thelma as if John had been consumed by it.

But in fact, he is transported BACK to Altrox, where their super-science restores him to life and health.  Again, he marries Naija, and she is killed as his powers fail him.  He then returns to earth, and his later adventures proceed as before.  This new version of his history brings back the violent acts of those early adventures, and Comet feels remorse for them, as opposed to the smiling glee he seemed to feel at the time, or the way the acts were tastefully ignored in the sixties.

At the time of the New Crusaders, John Dickering has married (it'll be interesting to see who he married) and adopted a son, Greg.  His son has somehow gained powers similar to his adoptive father's in a fashion I'm sure we shall discover.  While he's aware he's adopted, Greg's true parentage is unknown to him, and it's clear that this will be an important part of his part of the adventure.  Looking forward to learn more.

The New Crusaders will be available exclusively through the Red Circle App, available May 16th, with a print edition of the complete adventure available nearer to the summer.  The app also includes access to a library of the original comics of the characters as well.
at 8:52 PM