On a look at the Red Circle part 4 - The Web

Continuing my series of histories on the MLJ / Red Circle heroes in preparation for the first issue of New Crusaders on May 16th, here's... 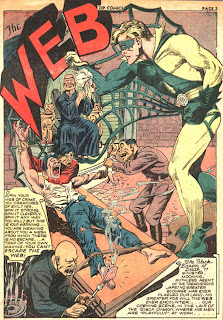 Premiering in Zip Comics #27 (with a double-page teaser in #26) The Web started off with a bang, fighting a band of Japanese spies who were kidnapping and torturing government officials for their secrets.  Professor of criminology John Raymond is asked to investigate a mysterious accident witnessed by one of his students, Rose Wayne.  As they try to prove that the accident was no such thing, Rose stumbles upon John's secret - he is the vigilante The Web.

In his second adventure, he brings Rose into his confidence and reveals his reasons for fighting crime to her.  His brother Tom was a proverbial bad egg from childhood, and his eventual arrest and sentencing to reform school inspired John to study the criminal mind.  Years later, Tom breaks out of prison and comes to John's home, threatening him into assisting him.  The police, unable to reach the professor to warn him (Tom cut the phone wires), come to his home in person, finding Tom there.  John realized that Tom's actions were his own undoing - criminals get caught in a "web" of their own making.  While John Raymond fights crime in the classroom and with his research, and The Web fights crime in a more personal fashion.

With so many different artists working on their books, they couldn't seem to keep Web's design straight from issue to issue - he changed from blonde to black hair regularly, often changing between the cover and the feature.  His yellow and green costume shifted quite a bit as well, the color panels moving location, the triangular panels in front coming and going issue to issue.
His last appearance was issue 38, a rather short run, compared to that of tentpole characters Shield and Steel Sterling.  But of all the characters they had, The Web was one of the few chosen to be brought back for the Mighty/Radio revival in the sixties.  In Fly-Man #36, a young man begins a career as a criminal, copying The Web's costume, but clearly not his love for the law.  After a brief battle against The Fly, the evil Web come to the attention of John Raymond, who realizes he has to come out of retirement to catch him.  Only problem is, Rose, now his wife, had him promise years before to hang up the cape, and she sees no reason he should risk his life again.  She allows him to catch the miscreant, and though he swears it's the only time he'll put on the suit, it's clear at the end of the story that he's gotten the taste for adventure again, and begins training while Rosie sleeps.

Web returned again briefly in Mighty Crusaders 4 and 5 (As did damn near every other old MLJ character) and more regularly in Mighty Comics.  Rosie's role went from caring wife to shrewish harridan quickly, even adding in the stereotypical mother-in-law.  The Web became known as "The Henpecked hero" on the cover of the books, and while his ability to fight crime was legitimate, his adventures became more campy and sitcom-like.  In one adventure, Rosie took the "If you can't beat 'em, join 'em" route, made up her own costume and became "Pow-Girl", to scare John into giving up the life.  Of course, she ends up being pretty good at it, he compliments her, but when (not recognizing her, of course) she offers him a kiss, he politely demurs, ad swings off, leaving her unsure how to think of his choice of leisure time activity.

The Web returned as part of the eighties revival as a member of the Crusaders.  Still married to Rosie, who now, according to a story in Mighty Crusaders #14 is now Ralph Hardy's (The Jaguar) sister.  Poor guy - if her mom is so hard on her son-in-law about being a hero, imagine how hard she'd be on her own son!

The Web returns in the New Crusaders -Wyatt Raymond is the son of John Raymond (and presumably Rosie), and unlike his parents, has actual super powers.  How did he get them?  How does Mama Rosie (not to mention Grandma) feel about him following his crazy father into danger?  We shall find out in only one day!
at 12:43 PM