On a look at the Red Circle part 3: Steel Sterling

Pop quiz - what's the first comic book character to be known as "The Man of Steel"? 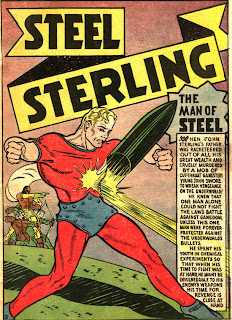 Steel Sterling had to stop appearing for a couple years before DC appropriated the sobriquet for the Man of Tomorrow.  first appearing in Zip Comics #1, Steel's origin flew in the face of science and physics as much as any other MLJ hero.

John Sterling's father was killed by gangsters when John was but a boy, and he vows revenge against them, and on criminals in general.  He becomes an eminent chemist as an adult, and invents a compound which will (OK, should) give him invulnerability.  He coats his body with the chemical, and with the zeal that can only come from a man obsessed with revenge, tests the compound by leaping into a vat of molten steel.  Arising unharmed, he has given himself "the resistance, the magnetism and the strength" of the steel he has immersed himself in.

In addition to his strength and toughness, he could "magnetize" himself by running his fingers through his hair, allowing him the ability to fly by attracting himself to things like power lines, or follow vehicles by locking onto them.

He leaps into crimefighting with both feet - hearing about a bank robbery in a nearby town, he flies over to stop them.  He overturns their car by throwing his body under their wheels, but one escapes via a rendezvousing plane.  A criminal by the name of the Black Knight is behind it, his headquarters in a castle near town.  After attempting to trap Steel, The Black Knight eventually falls into his own traps, and ends up in a pit full of rats, where he is nibbled alive...until his nitro-fueled booby-trapped castle blows up around him.  Or so it appeared - The Black Knight would return to plague Sterling for quite some time, along with numerous other villainous characters, like almost required Nazi villain Baron Gestapo.

Steel's earliest adventures were drawn by Charles Biro, who would soon go to Lev Gleason and take over Daredevil, the character having just been revamped by Jack Cole, who kicked off The Comet's adventures.  He appeared in every issues of Zip Comics (and each issue of the short-lived Jackpot Comics), though as the series continued, newer comedy features slowly stole his thunder.

Steel's participation in the Mighty / Radio comics revival in the 1960s would be cursory at best.  In a storyline in Mighty Crusaders that featured almost every MLJ hero reappearing, he made a brief team-up with The Jaguar and Mr. Justice.  His magnetic body had quietly been replaced by an anti-gravity belt, as well.  He also got three solo adventures in the later issues of Mighty Comics, formerly Fly-Man's titles, converted to an anthology book near the end of the run.   He was also one of four Mighty heroes to appear in a short-run paperback book called "High Camp Superheroes", all scripted by Superman creator Jerry Siegel.

He got quite a bit of a revamp in the 80s revival.  Issue three of Blue Ribbon Comics featured a new origin for Steel - it's now explained that this is the same Steel Sterling from the forties, and the story of his father being killed by the mob is largely unchanged, save we now know how it happened - a booby-trapped car.  New details reveal that John Sterling has a sister, Meg, who has been rendered unresponsive due to the shock of witnessing her father's death out the window when his car explodes.  He grows up, living with his mother and sister, helping the people of his neighborhood in whatever way he can.

One evening, a bright star seems to entrance John, and he follows its shine through town, and into a metal foundry.  Almost out of control of his actions, he jumps unprotected into a vat of steel, and emerges with the strength of the molten metal.  He finds his uniform in a nearby trashcan, an inner voice telling him it is for him.  the transformation also keeps him from aging - he lives to the eighties, unchanged from his life forty years before.

This version of Steel is more a man of the people, balancing a career as an aspiring actor with that of crimefighter and protector of the downtrodden.  He gets a plum role in an action movie, and donates his advance to a local soup kitchen.  In a new wrinkle, solar flares (perhaps connected to the light of the mysterious star) now have an odd effect on his powers.

He co-starred in Lancelot Strong's Shield title, taking over for him in issue 3 when Lance sacrificed himself against a powerful foe. The book would be re-titled after him for the remaining four issues, ending with issues 7. The events of his first solo issue would be a slightly expanded version of the story from Blue Ribbon.  Comics veteran Bob Kanigher handled the short run with style, but quickly pushed Steel out of his own book. He's nowhere to be seen in issue 6, replaced by a team of teen adventurers (created by Kanigher) called The Young Steelers, and a brief coda to Lancelot Strong's final adventure.  He returned for the final issue, in a story that gave him a chance to see some revenge against his father's death.

Steel Sterling never made it into the Impact comics run at DC, and was only mentioned in passing in their Red Circle revamp from last year, though there had been plans to do more with him had the line succeeded.  He's shown up in the occasional Archie issue, as have a few of the other MLJ heroes.  But the new title will be his first official appearance since that run from the eighties.

The Steel Sterling of the New Crusaders is the son of John Sterling - it'll be interesting to see who John married - will it be ace TV reporter Gayla Gaynor, the foxy Ms. Samson, or someone else entirely?  His sister Meg would be in her nineties if she was still alive, and likely still catatonic.  It'll be curious to see what changes they make to Sterling's history, if any, to link him up with the rest of the heroes.

The New Crusaders starts May 16th - pick up the Red Circle App to read the new adventures, as well as get access to a library of the original adventures of the heroes.
at 5:22 PM